Lunch at Levis, the popular daytime concert series, returns for its 16th season. The 16-week series kicks-off on June 6th and runs every Thursday until September 26th from 11:30 a.m. – 1:30 p.m. Live entertainment, food trucks, games and other activities are highlights of the biggest event during the work week.

Located in Levis Square Park, at the corner of St. Clair Street and Madison Avenue, the event is in the heart of downtown. More than 2,500 people attend weekly with many stating that “it’s the highlight of their work week.” It’s not just for downtown workers, the entire community is invited to attend.

New this year is the addition of pop-ups by the Arts Commission. Look for fun, interactive, engaging art throughout the season. The University of Toledo’s Rocket Week will be celebrated on September 12th when the park will turn Midnight Blue and Gold in celebration of the Rocket’s first home game of the season.

“Lunch at Levis is a neighborhood block party. Everyone enjoys seeing friends, being outside in a beautiful setting, having a choice of food from 15 different vendors and celebrating Downtown Toledo! We continue to make the event bigger and more exciting each year,” stated Cindy Kerr, Vice President of ConnecToledo.

August 1 – Johnny and the Houserockers

Lunch at Levis is sponsored by Explore 419, The Blade NewSlide, TARTA, The Sandpiper, HCR ManorCare and ProMedica Federal Credit Union. 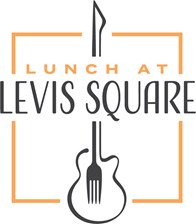