For the third installment in our Architecture 101 series, we’ve chosen another batch of five buildings. As an organization, we work throughout the greater downtown area – not just the central business district. You’ll see this reflected in our building selection, which includes downtown, the Old West End, Middlegrounds, and Warehouse District. As we did in Part I and Part II, we’ve noted features that help you understand historic use and style. We’ve also included brief histories because the people and stories together with the architecture is what make places special. We hope you learn something new on our virtual tour, and we hope to soon see you downtown checking these beauties out in person!

The Oliver House opened as a modern hotel in June 1859, designed by America’s foremost pre-Civil War hotel architect, Isaiah Rogers. Named for its investor, Major William Oliver, the hotel included modern amenities such as private rooms, limited indoor plumbing, steam heat, and gaslights – one of the first buildings to use them in Toledo. It offered over 160 guest rooms, a dining room, and ground floor commercial space.

A central cupola with a lantern was planned but never built

The hotel originally overlooked a park 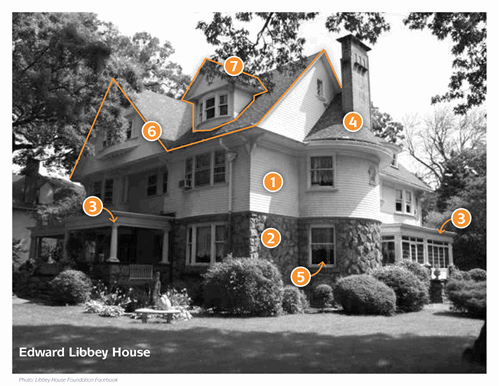 In 1888, Edward Drummond Libbey moved his financially troubled New England Glass Company to Toledo, where he was given a free plant site, and renamed it the Libbey Glass Company. In addition to his successful Libbey Glass company, Edward Libbey also founded predecessor companies to Owens-Illinois and Libbey-Owens-Ford. In 1901, the Libbeys founded the Toledo Museum of Art. He lived at 2008 Scottwood from 1895 until his death in 1925. The architect of the home had previously designed the Libbey factory for the 1893 Columbian Exposition. 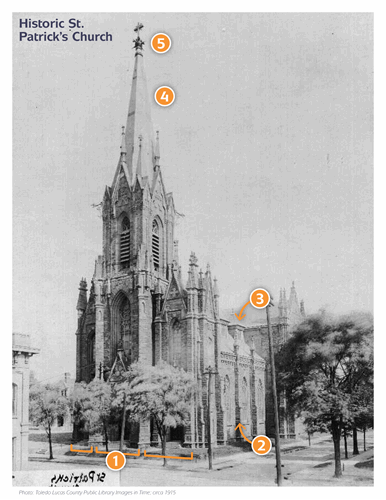 The neighborhood around St. Patrick’s was known as “the Hill,” and was home to Irish immigrants. Construction of the original church and a school began in 1862, and the St. Patrick Institute, which included dormitories, a gym, and a library, was built in 1874. The original church was demolished in 1892 to make way for the present structure, and the school and institute were demolished in the early and late 20th century, respectively. 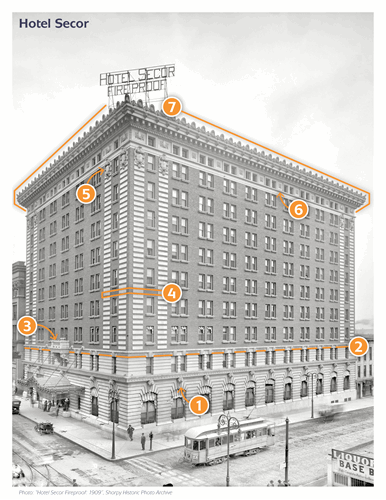 The opening of the hotel marked the beginning of the modern era for Toledo’s hotels. Hotel Secor offered a high-ceilinged lobby, waiting rooms, dining rooms, billiard rooms, and large meeting rooms for conventions. 300 of the 400 guest rooms included a private bath. The hotel closed was renovated in 1934, which included removing the original skylight and lowering the ceilings in the lobby. 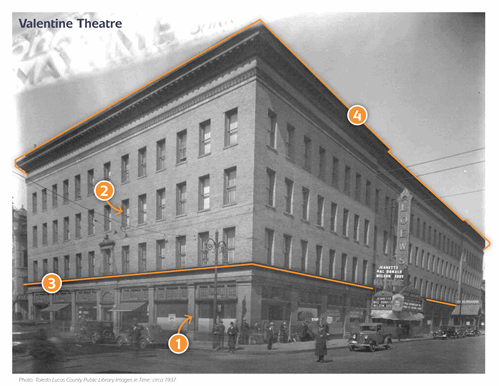 Named after Valentine Ketcham, the theater’s unique cantilevered balcony offered unobstructed views of the stage. In 1918, Lowe’s Circuit purchased it and installed a movie screen. In 1936, the office portion was remodeled into a hotel and is now used as residential space. The theater’s interior was completely remodeled in 1942. Today, the grand staircase is the only visible remnant of the original interior.