Architecture is an important part of any city. It indicates, even subconsciously, the type of place we’re in. When paying attention to architectural features, we find clues that help us understand an area’s history and the statements its people want to make about themselves – modest, showy, wealthy, modern, utilitarian.

Toledo’s downtown buildings are a great opportunity for such exploration. We’ve selected five buildings, highlighting features that help us understand the buildings’ historic use and style. We’ve also thrown in a little research you can’t get simply from looking at the buildings because the people behind these structures really make the place.

So enjoy the virtual tour. We hope you come away an armchair architectural aficionado. In the least, you can impress your friends and family the next time you point out a dentil or Corinthian column.

The Berdan Building was used for manufacturing and storing products for the wholesale grocer the Berdan Company. Valentine Ketcham, namesake of the Valentine Theatre, began the Berdan Company when he arrived in Toledo in 1836. The business, however, didn’t take off until 1854, when the Secor and Berdan families assumed control of Ketcham’s interest in the company. The Berdan Building is currently undergoing a renovation that will convert it into apartments and a first-floor restaurant. 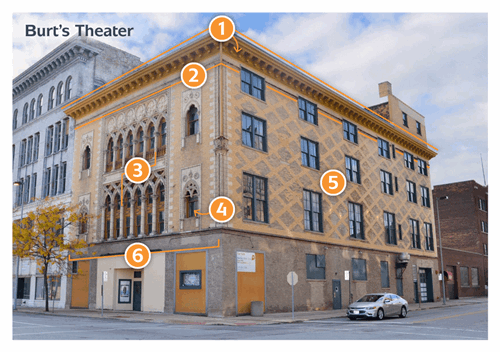 The building’s Venetian Gothic architecture is a rare find in Ohio. Additionally, Burt’s Theater and the Valentine are Toledo’s two remaining 19th century theaters. When Frank Burt opened on August 25, 1898, Vaudeville acts and melodramas were performed in the building’s 1,500-seat theater. Because Burt’s Theater never converted to a movie theater, it closed as a playhouse in 1913. Since that time, a variety of businesses have occupied the building. 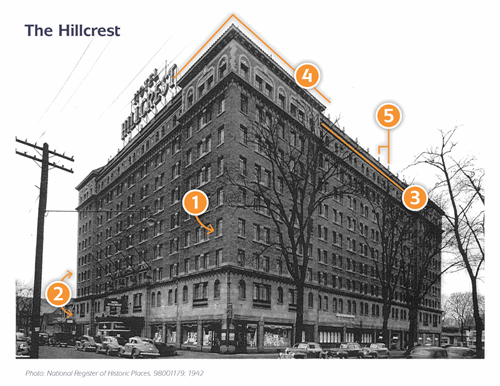 The Hillcrest Arms, as it was originally called, was built as a domestic apartment hotel. The small hill on which the building sits provided its name. Originally, the hotel offered a rooftop garden, which no longer exists. The Hillcrest was the first large building in Toledo to be constructed on a concrete slab without footings. It cost $2 million to build and furnish. After sitting vacant for many years, the building was refurbished. Apartments and several offices now inhabit the building.

In 1880, the Lasalle, Koch, and Company was formed. H.R. Macy and Company joined the business in 1924; however, it wasn’t until 1981 that the name changed to Macy’s. The business was closed three years later in 1984, the last of Toledo’s four major downtown department stores to close. In 1927, floors 9-11 were added; however, 10 and 11 were then removed in 1994 due to deterioration. Today, apartments occupy the upper floors of the building. 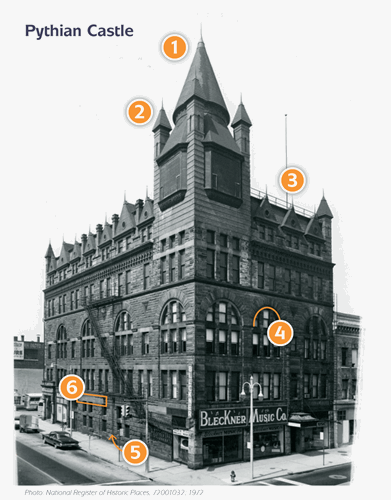 Five lodges of the Knights of Pythias purchased the vacant property at the corner of Jefferson and Ontario in 1889 to build a temple that would act as both a meeting place for the Knights as well as a business building. Between 1890-1951, the Consolidated Concord-Toledo Lodge No. 21 held weekly meeting in the building. The J.W. Greene Company, which sold pianos, occupied three floors from 1890-1960. The building sat empty for several decades before renovations began earlier this year.