The F1 powerboats will race on the Maumee River in between the MLK Bridge and the Owens Corning building at the mouth of Swan Creek. In addition to viewing at Promenade and International Parks, many restaurants are hosting viewing parties including The Heights, H2O Café, Zia’s Italian Restaurant and Real Seafood Co.

Come on downtown and make a day of it. Grab a ToleGO bike and explore downtown! Take a break in between heats and check out the Imagination Station, Toledo Museum of Art or National Museum of the Great Lakes. Downtown offers plenty of restaurant options, pick a new one to try this weekend! On Saturday, there will be food and drink available in the park. Bring your lawn chairs or sit in the bleachers. Pleasure boats will not be allowed in the race area during race times due to safety. 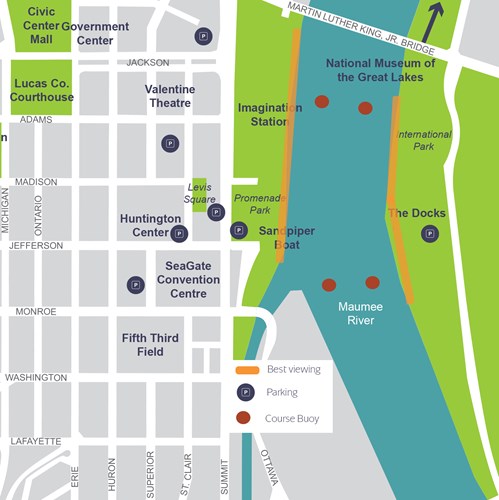 Awards immediately at the conclusion of the race

Toledo is the second stop on the Formula One season as the drivers compete for the NKG F1 Powerboat Championship. U.S. powerboat racing began in 1903. Over the last five decades, Formula One racing has offered fans an up-close experience with high speeds and razor-sharp turns. ProMedica, I-Heart Media and NGK Spark Plugs are the sponsors of this thrilling event.